Although it is now known that Michelangelo’s Bacchus (1496-1497) was commissioned in 1496 by Cardinal Raffaele Riario (1460-1521), the Cardinal of San Giorgio, the earliest sources by Condivi and Vasari claim that the Bacchus was commissioned by the banker Jacopo Galli. These claims are fueled visually by Marten van Heemskerck’s drawing The Garden of Jacopo Galli (1532-1535) and textually by Raffaele Maffei (in 1506) who describes the Bacchus in Galli’s house. But most importantly, they are supported by Michelangelo himself, who didn’t refute these claims in Condivi’s texts. Johannes Wilde was credited as the first art historian to suspect that the Bacchus was commissioned by Cardinal Rafaele Riario. This suspicion was then confirmed some 50 years later by Michael Hirst’s publication in 1981 of the cardinal's bank accounts. In addition to these accounts, Michelangelo’s first two surviving letters provide more evidence of the Cardinal’s commission. This exhibit considers the evidence that correctly identifies Cardinal Riario’s patronage to the Bacchus and explains what lead to the misunderstanding. A timeline of the events related to the Bacchus (now located in the Bargello Museum) helps explain enigmatic aspects of the sculpture's patrons. 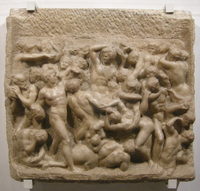 Battle of the Lapiths and Centaurs

This exhibit explores the artistic and cultural influences acting upon Michelangelo that formed his creation of the Battle of the Lapiths and Centaurs (1492). This unfinished artwork was one of his earliest surviving attempts at sculpting marble and in dealing with classical myth. Considering the humanist setting in which it was carved, during Michelangelo's time in the household of Lorenzo de' Medici, it is important to examine the humanist and artistic influences that surrounded the young Michelangelo. The discussion begins with a description of the myth and its place in humanist learning. Functioning in Neoplatonic thought as a tale of the higher nature of the soul triumphing over the base lust of the body, this was a part of the intellectual world Michelangelo found himself privy to. The antique and contemporary pieces of art which inspired and influenced Michelangelo follows. An interactive exhibit makes visible the similarities in Michelangelo's figures to the works of art he would have seen daily and studied in his own artistic training as well as display the beginning of his own exploration in sculpture and his experimentation with the human form.

This digital project examines how the Medici Sculpture Garden and the city of Florence at large influenced Italian artist and sculptor Michelangelo Buonarroti during his early artistic development. Michelangelo’s apprenticeship in the workshop of Domenico Ghirlandaio and his education in the Medici Palace and the Medici Sculpture Garden during his youth were foundational for his expansive career. Living in Florence gave him the opportunity to study the techniques and works of the artistic masters that came before him, such as Donatello, Ghiberti, and Giotto, in Florentine commonplaces like the Piazzi del Duomo and the Palazzo Vecchio.  In the years 1490-1492 when Michelangelo was living with the Medici family in their palace, he studied antiquities in the art collection of Lorenzo De’ Medici and learned of Neo-Platonic and Humanist ideas by friends and philosophers who frequented the Medici Palace. The artwork of Florence, the collection of Lorenzo de’ Medici and the Medici social circle created an expansive network that never left Michelangelo’s mind. Using visual and textual analysis to supplement and organize the Neatline digital component creates a clear visual map with annotated images to explain the aspects of the artworks, architecture, and Florentine people that all added to the richness and detail of Michelangelo’s influential and successful career.

In 1493, Michelangelo carved an eight foot tall marble statue of the mythological hero Hercules. Unfortunately, this sculpture was lost after sometime in France at the Palace of Fontainebleau. Due to its lost nature, this exhibit centers around the movement of the piece from Florence to France and the numerous hands it passed through on this journey. The mapping portion of the exhibit showcases the most probable trajectory of the piece from its conception to its last known location. By showing the movement of Hercules with a map and timeline, one is able to get a different perspective of how a work of art can be so removed from its origin and what that means for the interpretation of this work in history. The written portion of the exhibit explores the political significance of the Hercules as it changes hands through history. The exhibit aims to answer the question regarding Michelangelo's intentent for his Hercules statue and how the interputaion of his work changed as its location changed.

This exhibit explores Michelangelo’s Vatican Pietà (1498-1500) as an iconographical enigma that continues to puzzle scholars.