The Political Significance of the Hercules 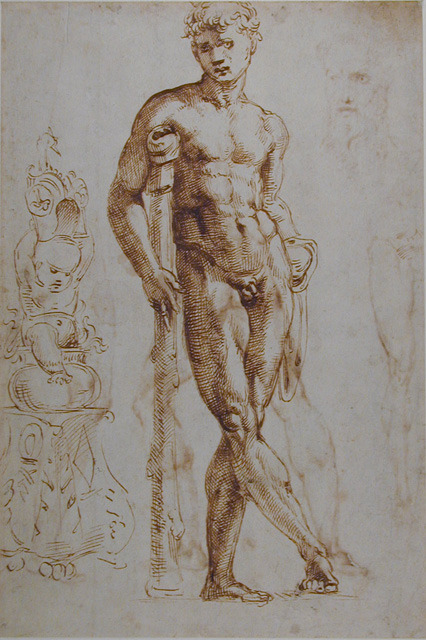 Michelangelo Buonarroti’s artististic talents are immortalized in great works of art such as the David and the ceiling of the Sistine Chapel which can be viewed in person by a modern audience. However, this is not the case for the small portion of the artist’s works that have been lost over the 500 years since his lifetime.  In 1492, Michelangelo sculpted a gigantic statue of the mythological hero Hercules. The statue has not been seen since 1713 but historians are able to understand the significance of this piece from records of its movement throughout history. It passed through the possession of a multitude of notable historical figures such as Piero de’ Medici, Filippo Strozzi, and King Francis I of France. While the statue of Hercules was lost by the early eighteenth century, its intended political meaning for both the Medici and Michelangelo himself was lost by its removal from Florence.

In 1492, Lorenzo de’ Medici the Magnificent passed away, which not only vacated the patriarch position of the family, but also the role of Michelangelo’s patron and mentor. In their biographies of Michelangelo, both Ascanio Condivi and Giorgio Vasari state that Michelangelo was so struck with grief by the passing of Lorenzo that he carved an eight foot statue of Hercules in memoriam.1 As Michael Hirst and many other scholars suspect, the block of marble required for such a statue was most likely too expensive for Michelangelo to purchase himself which leads to the question of a commission.2 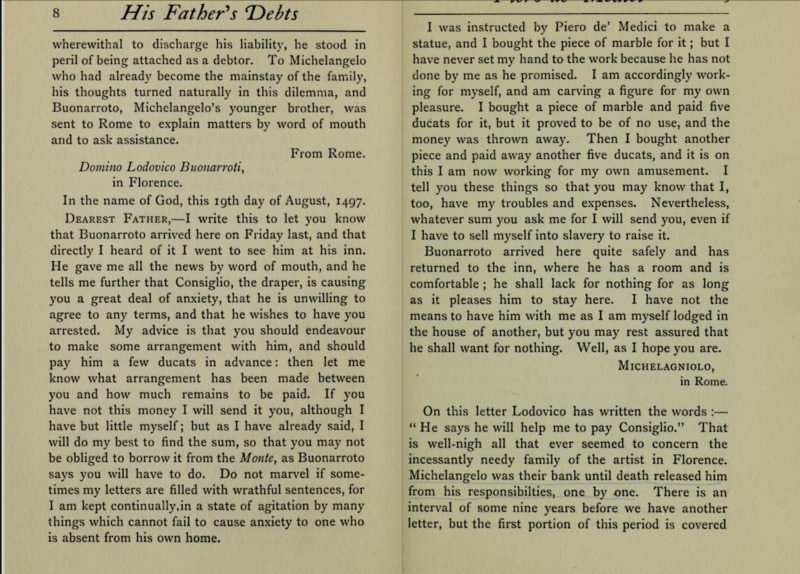 Michelangelo, Buonarroti, and Robert Walter Carden. Michelangelo; a Record of His Life as Told in His Own Letters and Papers.  London: Constable & company ltd., 1913.

After the death of Lorenzo, Piero de’ Medici was expected to take his father’s place as the head of the most powerful family in Florence. Condivi and Vasari both deny that Michelangelo worked seriously for Piero de’ Medici and offer instead an anecdote that Piero requested Michelangelo to make a sculpture out of snow after a winter storm.3 This story works to eliminate Michelangelo’s possible connection to Piero, who would be responsible for the exile of the Medici from Florence in 1494, which earned him the title “the foolish.”

However, a letter from Michelangelo to his father, Lodovico Buonarroti, in August of 1497 establishes his and Piero’s relationship as one of patron and artist as the Michelangelo states, “I was instructed by Piero de’ Medici to make a statue and I have bought the piece of marble for it.”4 Michelangelo’s relationship with Piero is not the only evidence to support that the commission of the Hercules was for the Medici. Maria Ruvoldt cites in Michelangelo’s Slaves and the Gift of Liberty, “When he fled Florence, Piero left behind a wealth of objects that were distributed by a committee of six Sindaci appointed by the republic to settle Medici debts. Among them was a marble Hercules restored on 11 August 1495 to a certain ‘‘Bonaroti,’’ who is surely Michelangelo.”5

By acknowledging the Hercules as a Medici commission rather than an independent work, the political and social significance of the subject of the mythological hero changes. While art historians cannot know whether the subject of Hercules was chosen by Michelangelo or Piero, such a mythological subject carries a strong political message to the benefit of Piero. Leopold D. Ettlinger, in Hercules Florentinus, states “The city government, he argued, picked on this specific symbol in order to tell all the world that Florence, like Hercules, was conscious of her power and would not allow any obstacles to stand in the way of her final goal: a pax florentina.”6 By commissioning a gigantic statue of Hercules, Piero aligned the Medici family with the strength of Florence and its history. Although ultimately unsuccessful, Piero tried to establish himself as a strong political figure similar to his “magnificent” father. 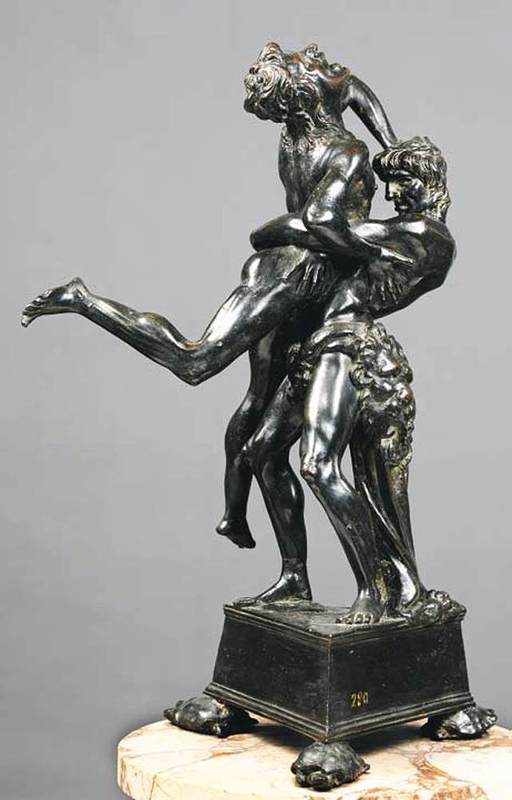 One of the many Hercules works of art owned by Lorenzo de' Medici.

The claim made by Vasari and Condivi that the Hercules was a tribute to Lorenzo de’ Medici is not an empty one.  The Medici Palace had displayed Hercules “time and again in paint and bronze, for Lorenzo il Magnifico was surrounded by representations of Hercules and his exploits.”7 Lorenzo’s own fixation on the mythological hero could have been a reflection of how he saw himself as well as an attempt to connect himself with Florentine iconography. Michelangelo and Piero would have been very familiar with Lorenzo’s many commissions of Hercules-centered works. Michelangelo might have seen this as an opportunity not only for a commission but also as a way to honor a man who greatly inspired his life. Similarly, Piero de’ Medici may have seen this as a way to further connect himself with his father’s legacy in Florence. The Hercules as a Medici commission holds a strong meaning for both Michelangelo and Piero de’ Medici as they tried to reestablish themselves after the death of the patron and father, Lorenzo de’ Medici.

Unfortunately for Piero de’ Medici, the Hercules statue could not save him from the anger of the Florentine people when the Medici were exiled in 1494. As previously stated by Ruvoldt, in 1495 the Hercules statue was presumably returned to Michelangelo as the Medici possessions were distributed.8 With the statue back in his hands, Michelangelo still held the power to determine the political significance of the piece. 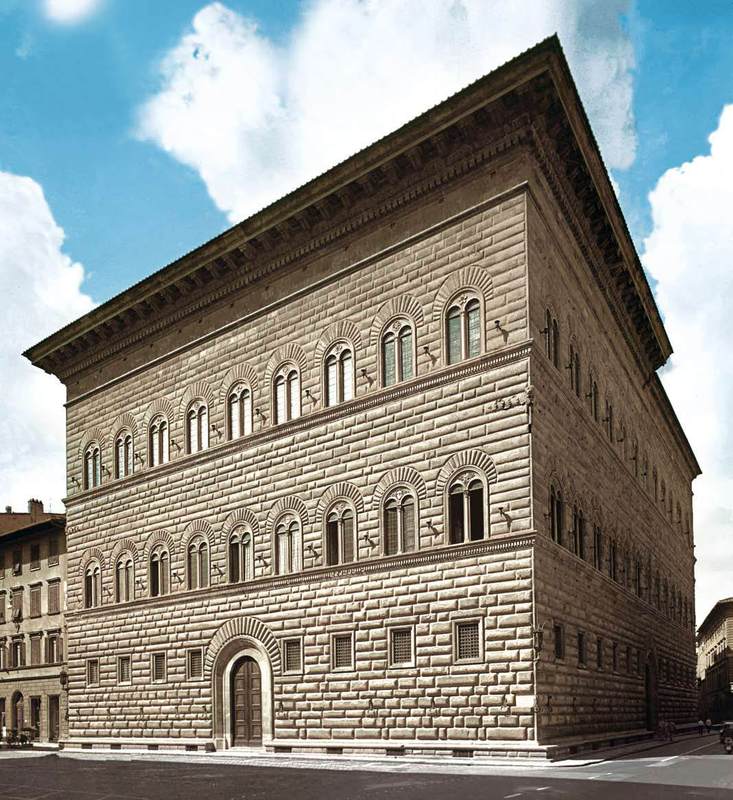 The Strozzi Palace which held the Hercules until 1529.

With the Medici out of the Florence, it is not surprising that Michelangelo turned to another powerful Florentine family, the Strozzi’s. Vasari briefly mentions that the Hercules “stood for many years in the Strozzi Palace and was considered a marvelous work.”9 William E. Wallace concludes that the gift of the Hercules to the Strozzi was “a shift in alliance” and “the seeking of a new patron.”10 In this way, the Hercules continued to be of political significance at a turning point in Michelangelo’s life. For the Strozzi, the Hercules still symbolized Florentine strength but instead it connected their family to the political scene rather than the Medici.

When Michelangelo handed over the Hercules to the Strozzi family, he lost any claim he had to the ownership of the piece. Filippo Strozzi, not unlike Michelangelo and Piero de’ Medici, used the Hercules as a means of gaining political favor. Caroline Elam describes the tense political atmosphere in Florence during the late 1520’s and the impending invasion of the Spanish imperial army.11 Filippo Strozzi used his connection to Battista della Palla to deepen the Florentine connection with France for support.12 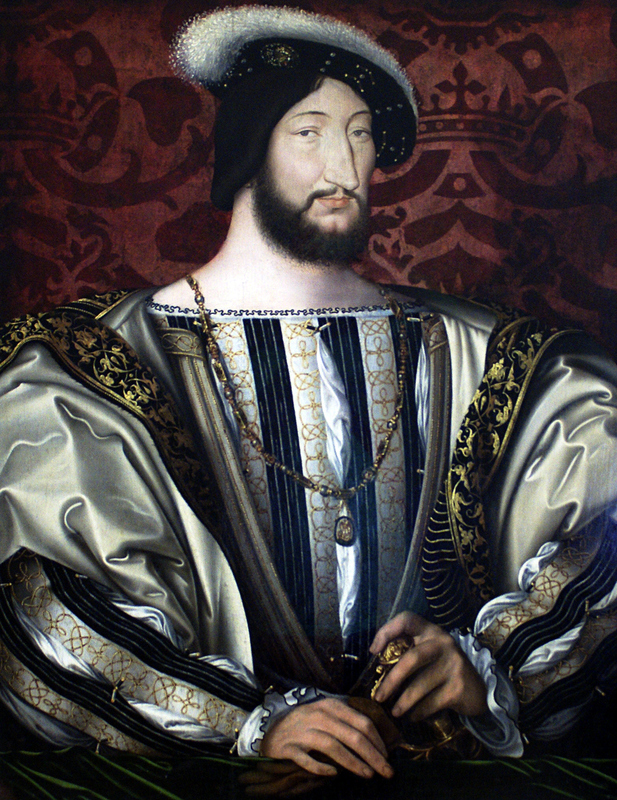 King Franics I of France

In 1529, Filippo's son Piero wrote to him that he had handed over the Hercules statue to della Palla as a gift to the King of France, Francis I.13 Once again, the Hercules was used a tool of political gain; however, this time without the input of Michelangelo. In a letter to Filippo from his brother, Lorenzo, he states, “many people - and especially Michelangelo - are unhappy that we are depriving ourselves of it” in reference to the departure of the Hercules from Florence.14 Ruvoldt attributes Michelangelo’s displeasure to “wounded pride” because Filippo removed the statue after over twenty years of ownership.15 While the movement of the Hercules from Florence to France was a political statement, it was not the political statement that Michelangelo intended to make in the context of Florentine society.

As a lost work of art, the Hercules is only accessible through its known history and reconstructions from other artists. When the Hercules reached France, it was installed in the Palace of Fontainebleau until the destruction of the Jardin de l'Etang in 1713, when it disappeared from written history.16 As it stood in the French garden, the statue did not hold the same significance to its French audience as it would have to the Florentines. While art historians cannot confront the piece in person, the historical evidence of Hercules iconography in Florence, letters written by those involved, and the accounts of Michelangelo’s life help put together a history of this work as it moved through time and space. Michelangelo could not have predicted the exile of the Medici, the fall of Florence, and the other numerous events that led to the statue passing from Florence to France. Taking all this into account and the lack of a physical piece of art, the Hercules can only be immortalized through its use as a political chess piece in the fluctuating political environment of sixteenth century Florence.

Images of Hercules →
The Political Significance of the Hercules