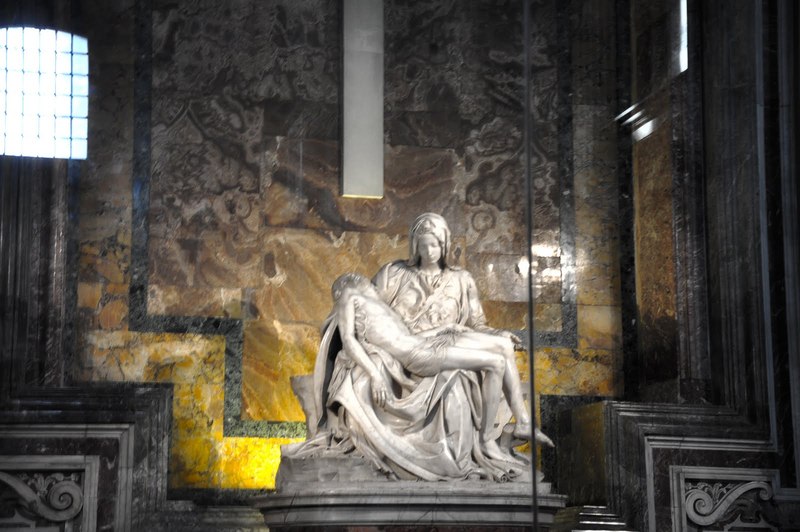 Presently, the Vatican Pietà is placed in the easternmost radiating chapel on the North side of the New St. Peter’s Basilica -- immediately to the right as one walks in. Scholars, historians, and tourists alike agree the current location is poor. It is surrounded by “a setting of Baroque splendor incompatible with Michelangelo’s taste.” (1) The ocher marble with busy patterns distracts the eye from the pure Carrara marble, and the vastness of the space belittles the true size of the sculpture. Additionally, the work is elevated on a base which deprives viewers from the intimacy achieved at eye-level. (2) Perhaps the harshest distortion is the bulletproof glass thatdivides viewers from the object. This distances viewers from the intense level of detail. Granted, the bulletproof glass protects the work; however, the connection that is lost as a result is tragic. Beyond the aesthetic, there is no indication of the politically charged commission or its funerary purpose. One positive element is the cross on the wall behind the sculpture, which maintains the narrative of the image: Christ taken down from the cross and placed in the arms of his mother, who melancholically greets him with a stoic acceptance of death. 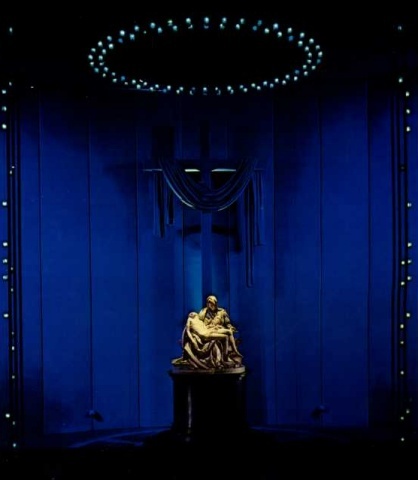 Continuing the theme of location, the Vatican Pietà traveled to New York in 1964. Architect and city-planner Robert Moses obtained permission from Pope John XXIII (3) to transport the work across the Atlantic for the World Fair in New York City, which attracted 51 million people in 18 months. (4) However, Michelangelo’s masterpiece was carelessly displayed -- isolated in an awkwardly-modern pavilion, behind bulletproof glass. The presentation focused on glorifying the popular image rather than explaining the narrative behind the subject or the story of the sculpture itself. This was, unfortunately, common; “set against the backdrop of the Cold War, the New York World’s Fair’s emphasis on capitalism and commercialization downplayed art” (5), principally exhibited as rebuttal against critics who labeled the World's Fair as a shallow, commercial endeavor. 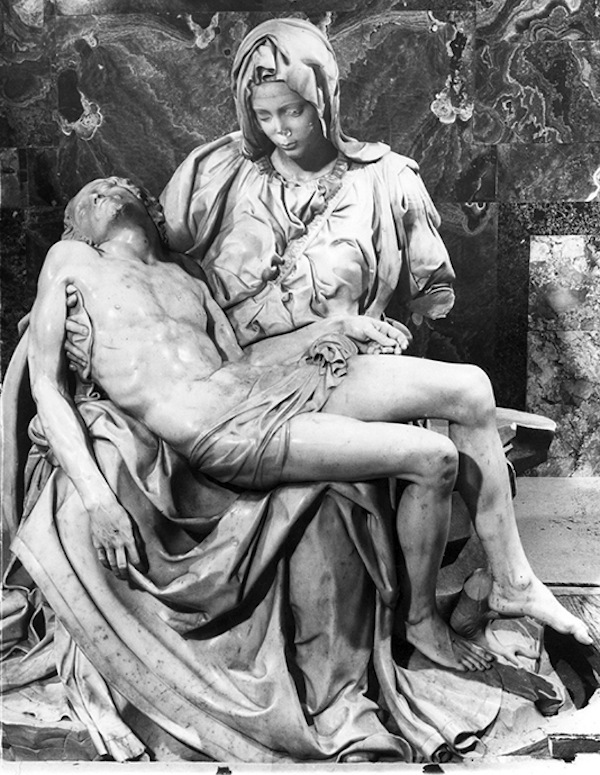 Part of the reason the Vatican installed bulletproof glass was in response to an attack on the sculpture on May 21st 1971. Laszlo Toth sprang from the crowd and struck the Vatican Pietà with a hammer approximately fifteen times before being detained. His motive is unknown; however, Toth allegedly exclaimed “I am Jesus” as he attacked the work, suggesting a deeply mental motive. The damage included parts of the Madonna’s nose, her eye-lids, and her most of left arm (from the elbow down) was broken off. (See accompanying illustration.) The restoration process was lengthy and delicate given over 100 pieces of marble broke off, and not all were recovered. Although it is no longer fully original, the sculpture has kept the effects intended by Michelangelo’s hand.

Today, people from all over the world - Christian and not - flock to Rome to see Michelangelo’s Vatican Pietà. Robert Coulahan accurately remarked that Michelangelo “created a work so glorious that to this day the term “pietà” evokes, for most people, only one image: the Pietà of St. Peter’s” (6). Although the masterful carving of flesh and emotion out of cold, firm stone is, arguably, enough to grant this work the reputation it has gained, one must understand the political complexity and theologically iconography to fully grasp this outstanding masterpiece.

This project has aimed to make such information more accessible.

← The Iconography
Bibliography →
The Current State