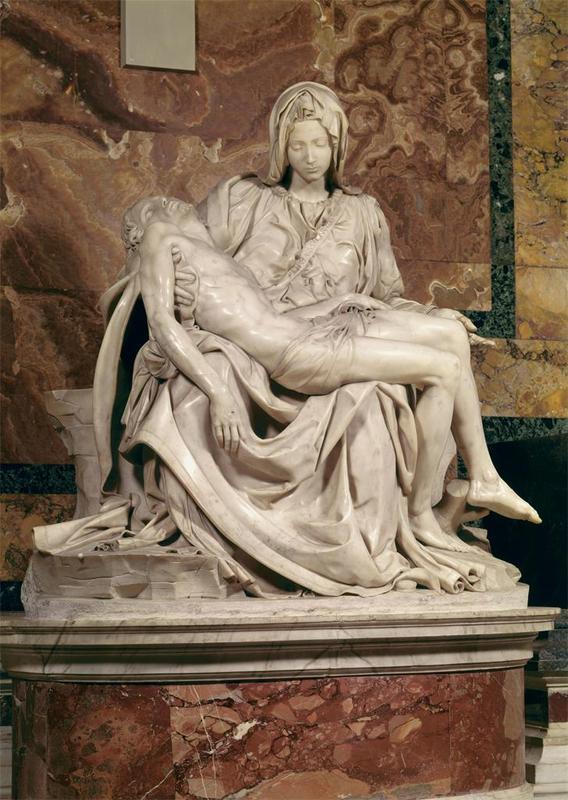 Although Michelangelo always maintained a strong connection to his Florentine roots, he found himself forced to move at the young age of twenty, following the tragic death of his mentor Lorenzo de’ Medici in 1492 and the shift into a theocratic Florence under the friar Savonarola, which prompted the Medici’s family exile in 1494. Soon-after his arrival to Rome in 1496, he carved a Bacchus for Cardinal Raffaele Riario; which was rejected upon completion. After a year of floundering in a new city without employment, Michelangelo received a commission that not only propelled Michelangelo into interminable fame, but also yielded one of art history’s most iconic images: the Vatican Pietà. 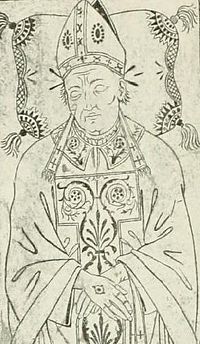 The work was commissioned by the French Cardinal Jean de Bilhères de Lagraulas, who lived in Rome as the ambassador to the Holy See for the French monarchy. The political nature of Cardinal de Bilhères is critical to understand the commission of the Vatican Pietà. In 1495, Cardinal de Bilhères was tasked “to enlist papal support for the king’s marriage to Anne of Brittany, heiress to the kingdom of Naples” (1). The mission was unsuccessful, in turn Charles VIII used military force to invade Naples. Following the Italian War of 1494-1498, the climate between France and Italy was severely tense; however, 1498 brought a new king to France: Louis XII, cousin of Charles VIII. Louis XII intended to amend relations with the Holy See; for instance, by orchestrating the marriage of Charlotte d'Albret, a wealthy French noblewoman and the son of Pope Alexander VI, Cesare Borgia, who gave up his cardinalate and priesthood to this end (2). Cardinal de Bilhères, still acting as ambassador, sought to aid this political reconnection with a sculpture, commissioned by a French cardinal, to an Italian artist, for French space, within an Italian basilica, of a typically French theme carved with Italian marble. This multi-layered mingling of French and Italian influence made the Vatican Pietà a “symbolic reaffirmation of the French presence in Rome” (3) to be displayed during the 1500 jubilee when thousands of Christians flocked to St. Peter’s Basilica -- especially for French pilgrims to whom the pietà was a familiar image. Furthermore, the aesthetically “harmonious composition and the peaceful expressive tonality of the Pietà fitted extremely well the religious and political communication” (4). The critical element of the sculpture's Frenchness was its location: in the Chapel of Santa Petronilla. 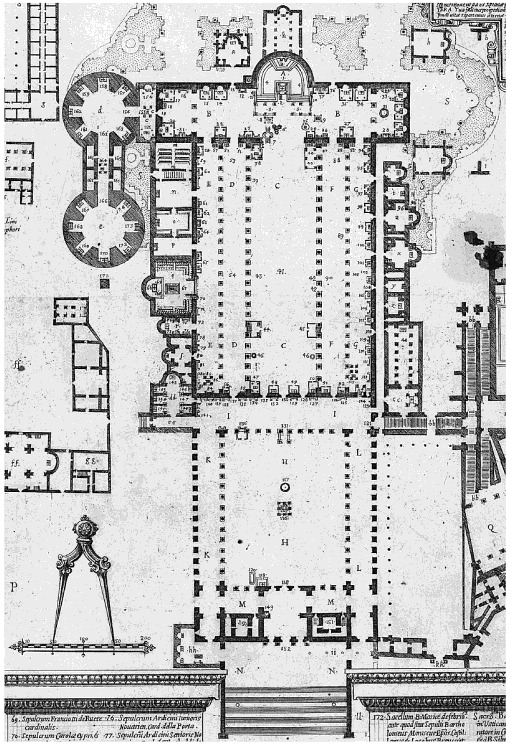 Santa Petronilla was an extension of the Old St. Peter’s Basilica in Rome. It was attached to the South end of the transept, and mirrored by an identical circular space extending East. These are understood as two small chapels with six, even smaller, radiating chapels within, as seen in the floorplan illustrated here. The dimensions are contested but the generally accepted to be approx. 16 meters in diameter, with each radiating chapel measuring 4.5 meters wide and 2 meters deep. (5)

The Chapel of Santa Petronilla is noteworthy given a prominent connection to the French crown. Condivi describes it as “replete with French royal associations” (6). This connection began as early as the 700s when Pope Stephen II named the line of French Kings the adoptive sons of St. Peter. Furthermore, Paul I (Stephen II’s successor) then transferred the relics of Santa Petronilla, daughter of Saint Peter the Apostle, to that location. Furthermore, it served as the hub of Charlemagne's faith in Rome, baptisinghis son there. In 1471, the French King Louis XI vowed generous donations after intensely praying to Santa Petronilla for the health of his sick son. His son recovered successfully and grew up to be King Charles VIII. Given the lengthy connection, Pope Alexander VIII officially acknowledged it as “Capella del Re di Francia” - “and the church stood, thereafter, as a symbol for the privileged filiation of the French monarchy and church and for their allegiance to the papacy.” (7) It was very appropriate for Cardinal de Bilhères to choosethis space for the Pietà.

Despite the heavy political connotations, the Vatican Pietà was also a funerary monument for Cardinal de Bilhères. The Cardinal commissioned the work at age 70, on August 27th 1498  and died at 71, on August 6th 1499, before the work was complete. The image of la Pietà was very adequate for a funerary monument. This purpose adds another dimension to the Vatican Pietà, making it hard to tell exactly how it was displayed in Santa Petronilla. The placement remains contested between scholars.

The principal debate of its placement and purpose is illustrated in a dialogue between Kathleen Weil-Garris Brandt and William Wallace. Brandt employs letters and the measurements of the chapel to argue that the work was placed on an altar. Wallace, on the other hand, mainly resorts to observations of the sculpture itself to argue it “is properly viewed no higher than eye-level.” (8) Beyond this dispute, both scholars agree it was a funerary monument meant to evoke pity and piety. 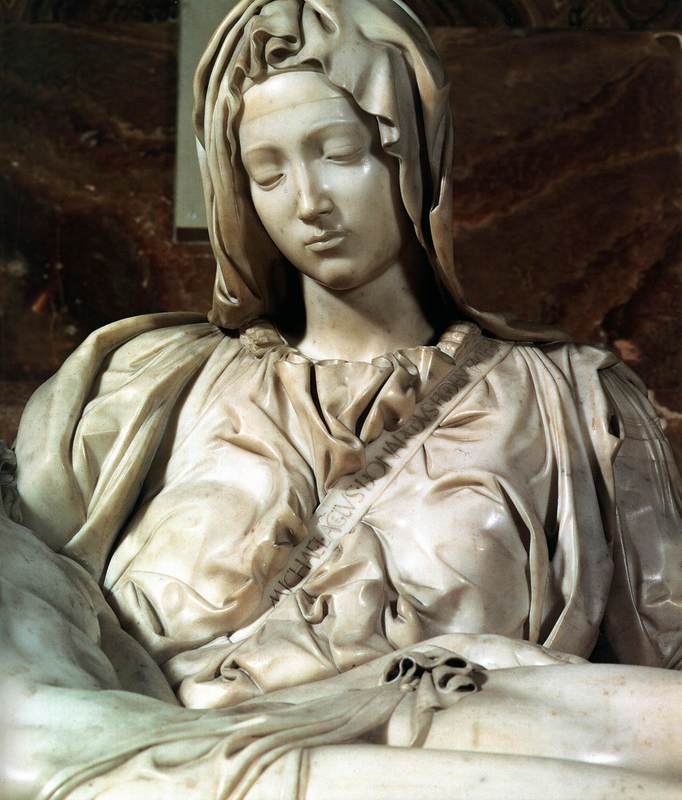 The theme of the Pietà, “pity” or “piety” in Latin, depicts a moment immediately after the crucifixion, similar to The Lamentation or The Deposition. However, the Pietà is unique in its focus on the Virgin Mary holding her dead son. This image originated in Germany and moved down to France during the Middle Ages (9), a time when devotion to the Madonna was particularly intense.

The few Italian pietàs that existed incorporated St. John holding Christ's head and Mary Magdalene holding Christ’s feet to remedy the awkward composition of a large corpse and small Madonna (10). Michelangelo returns to “another, older type of Pietà … of the lone Virgin, who, like a seated Madonna, holds her son on her lap” (11). Christ’s placement on Mary’s lap emulates the tender image of baby Jesus on his mother’s lap. Triggering a pure and natural moment between mother and son, with an image of suffering and sadness, fills the viewer with sorrow and compassion -- with pity. In turn, that pity becomes piety -- reverently accepting the sacrifice Christ made, and the sorrow of his mother as she holds her son’s corpse.

The Iconography →
The History